Slurry-Coat as an asphalt surfacing method is debated despite the statements in many industry publications! The origin may have been the German "schlammer" of the 1930's. A coating consisting of a mixture of very fine aggregates, asphalt binder and water was laid out on a road in Germany.

It proved to be a novel approach, a new and promising technique in maintaining road surfaces and it marked the beginning of slurry development. But this was a hot mixture, rather like the gauss asphalt used today, not a slurry in the rheological sense at all.

Later in the 1940's extensive and successful American experimentation began. A California company claims to have used the concept with asphalt emulsions, and asphalt emulsions are the real key in the 40's. But it was not until the 1960's, that real interest was shown in the usage of slurry on a wide variety of world wide applications. Slurry was used for the first time in Canada in the 1960s and then the United States. It is estimated that approximately 3.5 million square meters of asphalt slurry are placed every year in Canada. Asphalt slurry systems are heavily used in North America as preventive maintenance treatments. 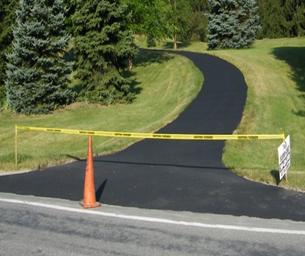 Then came the 1970's and 80's, as the economy began to grow, so came the proprietary, independent concept of Slurry-Coat. This was the discovery by Thomas J. Emond of T&D Asphalt Slurry-Coat LLC. as seen in Pavement Magazine.

"I visualized the need for a cost-effective modified asphalt slurry application for use on driveways, parking-lots, bike paths & private roads. My background in civil engineering and contracting made it an eventual reality".

As time went on Emond continued to improve Slurry-Coat with technological advancements, design and application techniques to the cost effective and beneficial product that it is today. For more information on What Is Slurry-Coat, Go to: Slurry-Coat